From NoskeWiki
Jump to navigation Jump to search 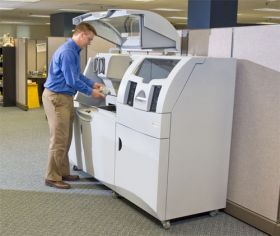 This is recently added article to keep track of any webpages I find on 3D printing. My interest on 3D printers started when a friend, Graham Johnson, printed a model for me on a 3D printer at SCRIPPS Research Institute in San Diego, which they run as a relatively inexpensive service called Scripps Physical Model Service. For this model they used a "3D powder printer" from ZCorp and I was very happy with the results - a plastic 3D color model about 15cm x 15cm x 15cm, which very good (~0.15mm) resolution. 3D models of this nature are great for prototyping in industry, and within science/education can be a great education tool.

Proper, high resolution 3D printers are incredibly expensive - $5,000 to $500,000, depending on what type of models you want. What's interesting, is that many people have written how-to guides to "build your own 3D printer".... although the results don't look like anything special for a lot of effort! As a third (more practical option) there may be the occasional place which offers 3D printing as a service. 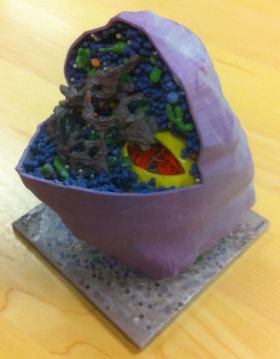 A model I made of a beta cell printed for me by Scripps Physical Model Service.

I first discovered 3D printers while living in San Diego, so here I'll list any 3D printing services in San Diego I come across. I'm sure there are others, so let me know!

What is 3D Printing?

A 3D printer works by taking a 3D computer file and using and making a series of cross-sectional slices. Each slice is then printed one on top of the other to create the 3D object.

There are several different methods of 3D printing, and to read about all of these I suggest you go to the Wikipedia entry on 3D printing. The main difference between these printers is in the way layers are built to create parts. To me, it sounds like the two most popular techniques are:

Two other less common types of 3D printing are:

For more information about see here: "4 types of 3D printing".